It Doesn't Go Away

As phenomenal as it is to have this beautiful baby in my arms at last, he has not been a cure for the emotional wounds of the last four years. I never expected him to be, but the last few days have taken me by surprise with just how intense and sharp and close to the surface that grief still remains. I knew it wouldn't really go away, but I thought it would dull around the edges. It doesn't. It is part of me and I'm not even sure I would want it to go away at this point.

Last week, I was staggered watching a Twitter friend receive news that her long-awaited pregnancy was over... and remembering the days and weeks spent processing the loss of my own first pregnancy in vivid and excruciating detail.

Then, I finally went to the grocery store for the first time since before I was pulled from work and put on bedrest... bad idea to leave Thumper at home with Daddy and go all alone. I found myself drifting up and down the aisles with tears dripping down my face, thinking how the last time I was at the grocery store (in June!) I was still pregnant. And staring down the knowledge that I will never be pregnant again and admitting that despite all the complications, I DO WANT to be pregnant again. I always knew I wanted two children. I knew when we had our first sight of Thumper on ultrasound that I still wanted him to have a sibling and I was heartbroken that he would be an only child. All of that grief came flooding back along with memories of years of pre-pregnancy grocery trips spent fighting tears over other women's pregnant bellies in the aisles. For some reason the produce section was always the worst...

All this also dregs up the memory of the phone call from the embryologist after our donor egg cycle, telling me that all of our remaining embryos had stopped growing and we had none to freeze. I closed my office door and sobbed for hours over those little lost lives, even knowing that they were only ever "potential". The power of that sorrow shocked me then and it still does. I never expected to be so attached to a handful of cells that weren't certain to be anything ever. For a few days, they were mine and then they were gone.

Email ThisBlogThis!Share to TwitterShare to FacebookShare to Pinterest
Labels: The Aftermath

NOT THAT ANYONE'S COUNTING

The Best of the Adoption/Loss/Infertility Blogs of 2012 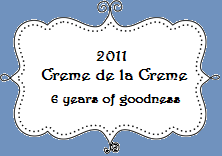 The Best of the Adoption/Loss/Infertility Blogs of 2011

The Best of the Adoption/Loss/Infertility Blogs of 2010

Click here to submit my news to the LFCA